Stewart Air Systems was founded on a rich tradition of superior craftsmanship and unparalleled client service. Building upon a solid family legacy, Steve Stewart became a third-generation professional in the HVAC trade, after choosing to follow the trail his father and his grandfather blazed over 60 years ago.

In 2000, Steve began actively working in the HVAC trade right after graduating from high school. Continuing his family’s legacy—one that was widely known locally and well-respected—Steve developed immense pride in providing outstanding HVAC craftsmanship and the rewards that come from offering his clients an exceptional experience.

As Steve rose through the ranks, his younger brother, Justin, took notice and wasted no time joining the company and began his own career in the HVAC trade. In 2004, even before graduating high school, Justin joined Steve in the business and quickly learned the trade. Fast forward to the year 2012, when Steve obtained his contractor’s license and Stewart Air Systems was born. From the very beginning, Steve collaborated with his brother Justin as an equal partner, and they begin building the company from hard work and referrals from happy customers.

As the years have passed, Stewart Air Systems’ customer base has expanded, along with a strong, positive reputation in Southern California. This is primarily because of entire team’s unwavering commitment to provide an exceptionally high level of service and outstanding client satisfaction. Steve is a very active father of five and has always worked to build a future for his children, along with a company that is a “family-centered” at its core. Inevitably, Steve and Justin’s younger sister, Destiny, joined the company and grew into the office manager and she has now become the voice of Stewart Air Systems. 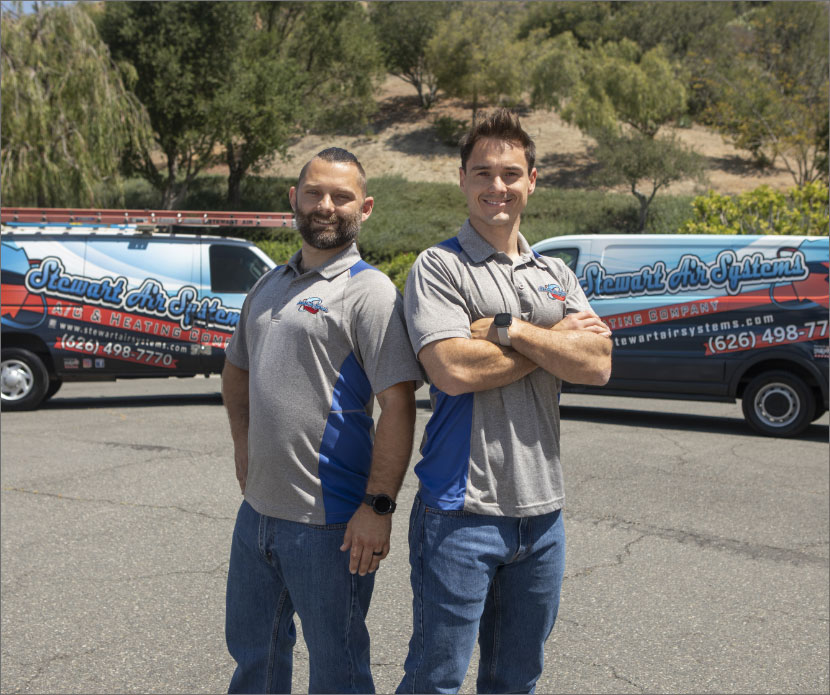 Today, Stewart Air Systems is home to many, long-tenured employees who have been recruited over the years—all who embrace the principles of quality and commitment that Steve and Justin set in motion many years ago. Rooted deeply in our DNA from generations past, Stewart Air Systems is a company that believes in a dedication to excellence in the trade, putting people first, protecting the environment, and treating people the way we like to be treated. Stewart Air Systems was built on solid foundation, with our family proudly serving your family’s HVAC needs exceptionally well.